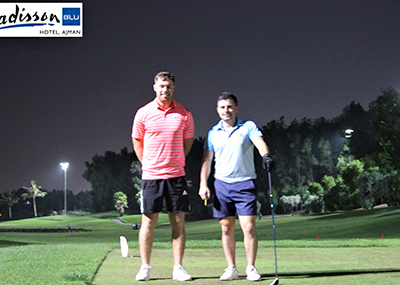 The popular Radisson Blu Hotel Ajman midweek special returned on Wednesday evening and a full field descended on SGSC. With great prizes up for grabs players competed under the lights from the white and yellow tees.

Players in teams of two faced the formats of foursomes for the front nine and better ball. Familiar faces topped the Radisson Blu Ajman leaderboard with the pairing of Connor Freeman and Ciaran O’Brien. The duo were on top form all night finishing with a sizzling net score of six under par sixty six. Connor and Ciaran overcame the challenging foursomes format posting an impressive one under par for the front nine they then dovetailed perfectly in the batter ball format with a nine-hole score of five under par which resulted in their impressive total. Both were delighted to take home the brilliant prizes put up by Radisson Blu Ajman. Runners up on the night were SGSC low handicapper Ramli Sulaiman and Yezen Kannan a brilliant score of sixty-nine. Their round was also highlighted with an impressive six birdies in what was a great night of golf.

On course competitions were also added to the event, Nearest the Pin on hole 3 and 12 was won by Ravi Ae.