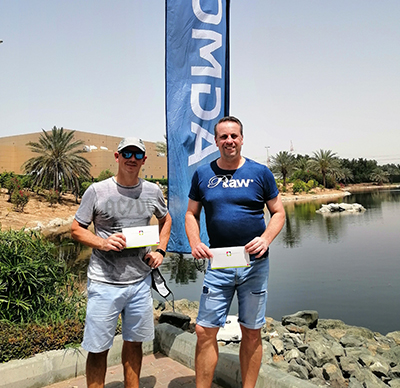 The ever-popular BMW Series Open Social returned to SGSC on Saturday the 20th of August. Golfers braved the summer heat in an attempt to get their hands on the great prizes put up by AMGC BMW. Competitors turned up in numbers and faced formats of Texas Scramble on the front nine and Better Ball on the back nine.

It was the duo of Lee Atkinson and Robert Darrah who dovetailed perfectly to post a very impressive nine under par and top the leaderboard at the end of the days play by an impressive two strokes. A brilliant back nine as the pair combined perfectly to post an unbelievable eight under par in the better ball format. A steady one under par on the front nine in the scramble format combined with the impressive back nine saw the pair atop the leaderboard and the pair were delighted to take home the prizes on offer.

Other winners on the day were Diman Rai and Neil Wijeratne who had a very good score of four under par on the front nine in the Texas scramble format. Final prize on the day up for grabs was for the best back nine, winners were Raymi Van Der Spek and Stuart Cassidy who posted a very impressive score of thirty-two, four under par in the better ball format.