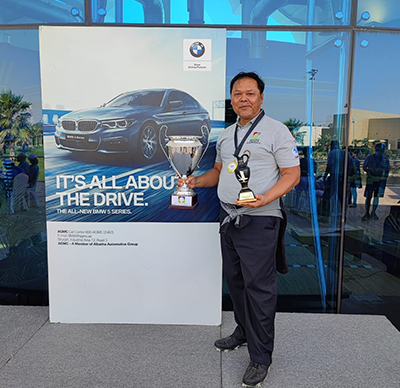 Sharjah Golf and Shooting clubs newest event and possibly the most popular event on the calendar the International Cup supported by BMW came to a close on Sunday the 20th of Feb. The event had four qualifying rounds with all participants hoping to represent their team in the final. Teams of America, Europe and Africa will battle it out against Asia and The Middle East in a twenty-seven hole Ryder Cup style final. With twenty-four spots in each team up for grabs in the final golfers were delighted to make their respected teams.

With a mixture of members and non-members in both teams and both sides fielding a very strong line up it was almost impossible to name a favourite before the day. Playing 18 holes in the morning the teams played better ball matchplay for their first nine and then on to the tricky foursomes format for the back nine. After the morning eighteen Asia and Middle east had a three-point advantage but with twenty-four points still up for grabs it was very much all still to play for in afternoon singles. Each player faced a nine-hole singles match against their opponents. Half way through the afternoon singles it was looking like it was destined to be a close affair, however the resilience of Asia and Middle East pulled through to claim the 2nd International Cup by a score of 21.5 versus 14.5.

The event and the final day was highly praised by all golfers who are already eager to make sure they secure their spot for next years final. Some great golf was produced on the day and was great to see some real competitiveness but as always played in a wonderful manner.