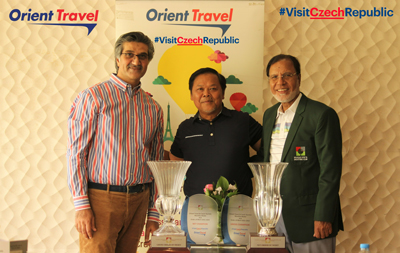 SGSCs final monthly medal of the season and OOM finalized

Sharjah Golf and Shooting club hosted the final Orient Travel & Czech Tourism – Monthly Medal & Net and Gross Order of Merits of the season on Saturday 7th of May. With some unbelievable prizes up for grabs it was a competitive day as people pushed to get to the top of the Order Of Merits. Ramli Sulaiman stormed to victory in the days prize posting an excellent net sixty eight and took home the May edition of the event. Mr Sulaimans round included three birdies and just one dropped shot from the low handicapper. This score was enough to take the title by two shots over Aadil Khan who took the runners up spot on a score of seventy. Third place went to past SGSC Captain Rory Thomson also on a score of seventy just losing out on runners up spot via a countback.

The Net and Gross Order of Merit which runs alongside the monthly medals came to a close on Saturday and with several players still in with a chance to finish in the top spots and win a trip to the Czech Republic the outcome was very close. It proved to be a monumental day for Ramli Sulaiman as his exploits on the final round saw him clinch both the Net and Gross OOMs. Ramli was leading the gross order of merit fairly comfortably all season and his great round in the final saw him leap frog and claim the Net OOM on a total of one hundred and nine points. Ramli who was this years SGSC club champion has now added both the Gross and Net OOM wins to his impressive collection. Sami Butt had also played some great golf all season and claimed the runners up spot by the narrowest of margins. Sami was only one behind the eventual winner Ramli and only sealed the runners up spot via virtue of a countback over George Liu. Both Sami and George finished the season on one hundred and eight points. All players were full of praise to the sponsors Orient Travel who have been a founder sponsor here at SGSC and their continued support is very welcomed by all. The addition of Czech Tourism for the first time this season has given the players even more to play for and made it an even better event.

Well done to all involved been a great OOM this season.