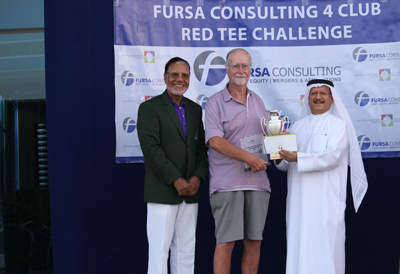 Tim Craig chooses wisely as he blows the field away

Sharjah Golf and Shooting Club held the third edition of the Fursa Consulting Red Tee Four Club Challenge. This event is a highlight in the schedule to both members and guests due to the enjoyment of the format and the great prizes up for grabs. The star on the day was Tim Craig who has an unbelievable score of a net fifty eight. A brilliant round that included a staggering thirteen net birdies and unbelievably also a net eagle. Considering only three clubs and a putter were permitted this really is an excellent score, maybe Tim will consider using four clubs more often. There were several other good scores on the day including runner up Marghoob Khan posting sixty one which on any other day would have won by several strokes followed by Sam Gilbert in third place six shots back on sixty seven. Gurbax Sign claimed fourth place just beating Arnel Valencia on countback as they both score a solid sixty eight.

Fursa Consulting put up an array prizes on the day so there was lots for the players to play for. Winner of the best front nine score was Faye Mohammed with a score of thirty two net. Back nine winner also with a fantastic score of thirty two was Sultan Qazi. There was also a hidden holes prize where the players did not know what six holes would count towards this prize, Ravi AE took home this award with a score of three under on the selected holes. The final on course prize was nearest to the pin this went to SGSC Director of Golf Sam McLaren whose perfectly struck gap wedge finished a feet from the hole. All was not lost for the competitors who didn’t win any prizes on the course as there was a blind scorecard draw at the end of the presentation. Winners from the draw were Andrew Thom, Ramli Sulaiman, Abdul Moiz Khan, Fatih Bozkurt and Sunny Ramadas who were all delighted to walk away with pro shop vouchers.

Mr Abdul Moiz Khan the Managing Partner of Fursa Consulting along with Dr Mohammed Saeed Al Kindi Board Advisor at Fursa and former environment minister of the UAE presented all the victors with their prizes. Mr Abdul then proceeded to share the good news that Fursa Consulting will continue to sponsor this great event for years to come much to the delight the competitors and everyone at SGSC.