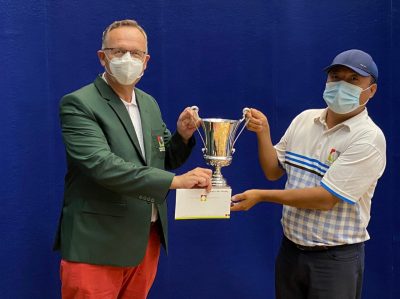 Sharjah Golf & Shooting Club and club captain Hans Ettengruber hosted the 9th Captains Day on Saturday the 29th of May.  Hans put up some fantastic prizes and a full field all battled it out to finish top of the pile on the day.

There was some great scores recorded on the day, players also had lots of fun on course prizes to compete for. It was Boung Kwon You who continued his rich vein of form posting a brilliant stableford score of forty points. Mr Yous round included an incredible three net eagles and three net birdies as he guided his way to victory. In second place just missing out on top spot was Gary Hibbert whose excellent round of thirty nine points saw him fall just one point short of top spot. Third place went to past SGSC captain Mukti Rai who had a very steady round of golf posting a score of thirty eight stableford points.

Best Gross went to low handicapper Cian Hart, Cians brilliant gross score of five under par saw him also post a score of forty one points. Cian played brilliantly all day with a round that did not include a bogey. Jamie Camero took home runners up spot with an another fine performance of thirty nine points. Thirty one points was enough for Sami Butt to take home the spoils for third place. Finally Martin Duffs score of thirty four points saw him claim Captain Hans Ettengrubers guests division after an impressive round of golf.

Several other prizes were awarded on the day and thanks and well wishes were once again extended to the Captain and next seasons captain Ravi AE.