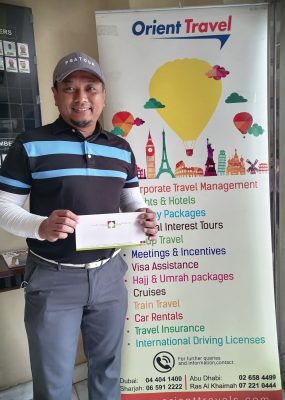 Some of the best golf of all season was played in the popular members event the Orient Travel Monthly Medal on Friday the 19th of March. Players took advantage of the outstanding course conditions to shoot some of the lowest scores we have seen all season. Topping the leaderboard on the day was Jumadi Bin Husani with a jaw dropping net score of nine under par sixty three. Jumadis round included a staggering ten birdies and just one drop shot in what was a near perfect round. In runners up spot and very unlucky not be champion on the day was Shaheen Butt who posted eight under par sixty four an unbelievable round from Shaheen which also could have been better I it was not for a triple bogey on his final hole. Third place went to SGSC vice captain Ravi AE who also had one of his rounds of the season posting a six under par sixty six.

Finally in the Gross Division Adam Smiths solid round of one over par seventy three saw him top the gross division by a single shot over Adam Smith.

The Order of Merit has been a highly competitive one this year with some of the biggest names at SGSC all in contention, with two rounds remaining its certainly still all to play for. It will run throughout the season & conclude on Friday 14th May 2021.