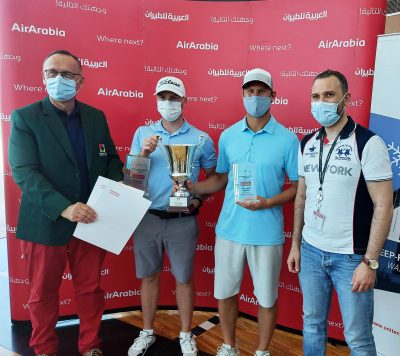 The season-ending Air Arabia Matchplay awards were presented at Sharjah Golf & Shooting Club on Saturday May 22nd with all the net and gross titles presented to the victors and the runners up.

In the net categories prizes singles champion went to Adhip Shankar and this years runner up was Shaheen Butt whilst Chris Bagge was in third place. The pairs event went to the strong pairing of Adam Smith and Christopher Andrews beating Amir Inam and Abdul Moiz Khan in the final. Ali Mansour and Chris Bagge also collected their third place trophy.

All the season’s winners and runners-up received trophies and return tickets to any of Air Arabia’s 70+ worldwide destinations from Golf Club Captain Hans Ettengruber and Obadah Arwani  Air Arabia area manager – UAE.  SGSC Director of Golf Sam McLaren thanked Air Arabia who are founder sponsors of the event having supported all of the events to date.

Some great matches took place throughout the season with several matches being decided on the final hole, as always every game was played in great spirit.