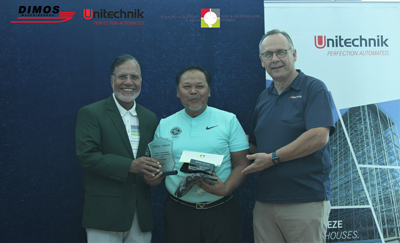 SGSC low handicapper Ramli Sulaiman has had the season of his life and he finished the season in style claiming the
final Unitechnik – Dimos monthly stableford of the season. A large and strong field descended on SGSC on Sunday 22nd of
May all trying to get their hands on the generous prizes put up by the sponsors. It was Ramli Sulaiman who picked up yet another trophy a solid round of golf which included four birdies saw him sit nicely at the top of the leaderboard on thirty eight points. Ramli claimed top spot by virtue of a countback and he was delighted to take home the top prize on offer the DIMOS – Unitechnik Commemorative Trophy, AED300 Pro Shop Voucher & Unitechnik golf balls.

Winner of Division A was SGSC past Captain Mukti Rai scoring an impressive thirty eight stableford points which was enough to place him on top of his division at the end of the days play. Mukti lost out agonizingly on overall top spot via countback however he still went home with AED200 Pro Shop Voucher & 3 Unitechnik golf balls.