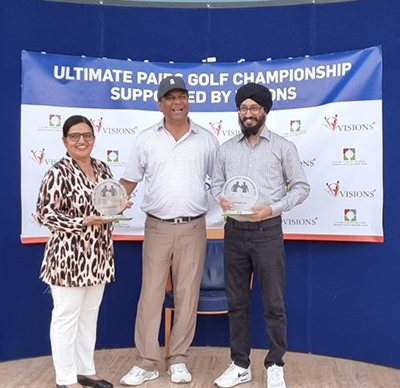 SGSC held one of its most popular events on Saturday the 29th of January the 12th edition of the Ultimate pairs. This year we were delighted to welcome Visions on board to support the event with special thanks to SGSC member and managing director of Visions Irfan Izah Izar for making this happen. Randeep Singh and Sautnam Kaur dovetailed perfectly to storm to victory in the latest edition of the ultimate pairs. Thirty six holes event that combines four different formats is always a challenge for any partnership but Singh and Kaur did it with ease. The duo topped the leader board by an narrow margin of two shots, cruising to victory with an impressive score off six under par total of one hundred and thirty eight. The pair overcame all the formats including the challenging foursomes on what was for both a very impressive thirty six holes. The pair were delighted to go home with the trophies and were both full of praise for both the event and the condition of the course.

Second place went to Sergio and Sidney De Souza, the pair were unlucky on the day as they finished on a total score of three under par that many occasions would have seen them crowned champions. Third place was won by Namir Al Naimi and Sami Siddique after a solid days golf. Low handicappers Ramli Sulaiman and Sunny Ramadas took home the spoils for best gross on a total of one hundred and forty five. Other Prize winners on the day included Chris Andrews and Andrew Thom who took home best Texas Scramble score with an excellent score of six under par. Best Greensome prize was collected by Neil Lakhani and Anthony Gill posting a brilliant score of thirty five. Aadil Kahn and Ahmad Jaffar took home the Betterball prize on a score of three under par. The final prize up for grabs was for the tricky Foursomes format where Gurbax Singh and Ravi AE gelled perfectly to post an impressive thirty six and claim the spoils.

A great day was had by all in this ever popular event and the inclusion of Visions made it one of the best Ultimate Pairs yet, the challenge of the four different formats adds some extra spice to the day.