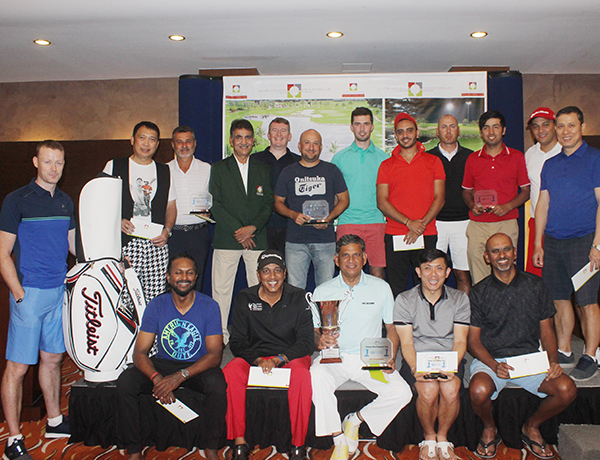 Sharjah Golf & Shooting Club and club captain Sanjoy Das hosted the 7thCaptains Day on Saturday the 4th of May. Sanjoy put up some fantastic prizes and a field of forty plus descended to try stake their claim in being this years champion.

On a day that was perfect for golf on a course in top condition the golfers had some very interesting tee positions and on course prizes to keep them entertained. Past SGSC captain Vivian Verma was the man on form posting a very impressive forty stableford points, Vivians round included five net birdies and a net eagle in what was very solid round of golf from the twelve handicapper. Vivian claimed the title by three points over SGSC member Ali Tiwana who posted a score of thirty seven. Ali has played some excellent golf over the duration of the season and has seen his handicap tumble. Third place went to David Yeo who had an excellent five net birdies in his last eight holes.

Best Gross went to Ramsey Yassin with another fine performance of thirty three points and a timely birdie on the last hole was enough to narrowly pip Namir Al Naimi on countback. Ben Mulvaneys score of thirty two gross saw him take third spot. Captain Sanjoy Das guests division was won by Andrew Thomas on best score of the day forty six points. An added prize on the day was hidden teams this is done by a random draw of all players, the winning team was Ben Mulvaney, George Liu, Ali Tiwana and Vivian Verma.

There were many prizes up for grabs on the day, Mohan GC claimed nearest to the Pin on the 3rd/12th. Ahmad Jaffer hit an excellent shot to win nearest the pin on 8th/17th.  The last two on course prizes were nearest to the pin in 2 on the 5th/14th which went to Sunny Ramadas and Vivian Verma took home another prize as he hit the best 3rd shot on 6th/15th. The captain had some special prizes on the day including a fantastic Titleist golf bag, David Murphy was the lucky man who won the bag in the scorecard draw. Other names that came out in the draw were, Arnel Valencia, Rajesh Chitti and Namir Al Naimi who all won a voucher. Some might say the biggest prize of the day for best dressed golfers was won by Hanief Sallie who made maximum effort. Thanks and well wishes were once again extended to the Captain and next seasons captain Rory Thomson.