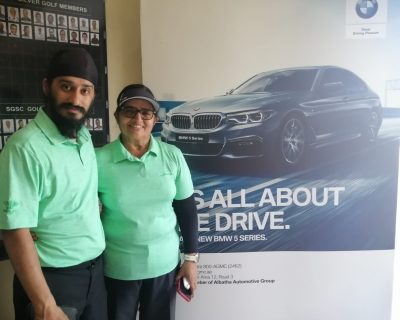 The BMW Series Open Social was held on Saturday the 13th of November. Always a popular event and eighteen pairs descended to try and get their hands on the great prizes put up by AMGC BMW Competitors faced formats of Texas Scramble on the front nine and better ball for the back nine on what was a highly competitive day of golf.

Winning on the day only via virtue of a countback was the pairing of Sandip Singh and Satnam Kaur. A brilliant score of ten under par was enough for the pair to be victorious on the day and take home the prizes on offer. The pair played some great golf practically on the back nine posting a score of six under par thirty in the better ball format.

Other winners on the day were the husband and wife combo of Rory and Kimberly Thomson who had a very good score of six under par in the Texas Scramble format. Final prize on the day up for grabs was for the best back nine, winners were Fatih Bozkurt and Oliver Chrisostomo who also posted a score of thirty, six under par in the four ball better ball format.