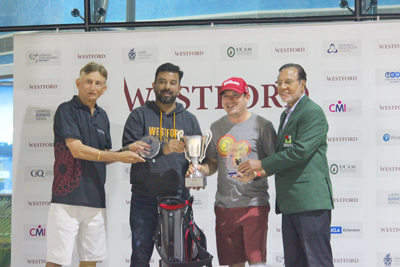 Steve Duque was delighted to be crowned winner of the very popular Westford Sharjah Cup. A brilliant day of golf saw the SGSC member get his name up on the honours board by winning this major event. A strong field all competed eighteen holes on a golf course that is in excellent condition. After eighteen holes the top two could not be separated on a total of forty-one stableford points so back they went to play the eighteenth hole in a sudden death playoff. Sean O’Callaghan was the unlucky runner up as he lost out to Steve on the first sudden death play off hole. Steve made a brilliant up and down from the right-hand side of the green to claim victory. Sean had a great round of golf posting forty-one points and was unlucky not to be the days champion. He did however go home with the spoils for the runner up. Steve was delighted to get what is so far his biggest victory, In his speech he thanked Sean for the battle and also thanked Westford for putting on such a great event. Chandra Sekharan took third place with a total of thirty nine points. Also picking up prizes for their efforts on the day were Arnel Valencia who won the seniors division and Kimberly Thomson won the ladies Division both posting scores of thirty nine.

As always, this event was played in a great and highly competitive spirit, with all competitors loving the challenge of the course and praising the sponsors Westford University College for their support in the event.