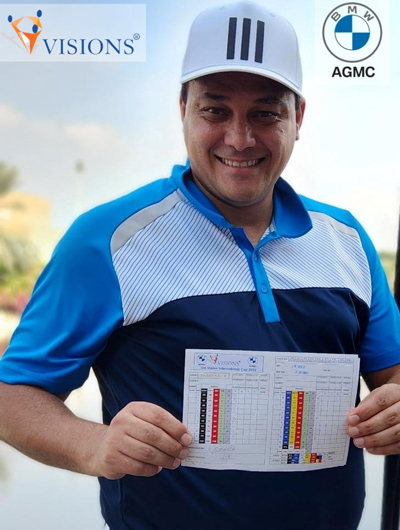 The hugely popular International cup is set to be bigger and better than ever thanks to Visions who have sponsored this fantastic event and with the continued support of BMW players are very excited for what is to come. The second qualifying weekend for players to represent their countries took place over the weekend of the 19th and 20th of November. Teams of America, Europe and Africa captained by David Murphy will battle it out against Asia and The Middle East captained by Irfan Izhar in a twenty-seven hole Ryder Cup style final. With twenty-four spots in each team up for grabs in the final golfers are keen to secure their spots in their respective teams.

The excitement for the event was shown over the weekend with a staggering field of over fifty players all trying to secure their spots early for the final and also get their hands on the days prizes. Securing his spot for America, Europe and Africa and winning the overall qualifying prize for the second round was Hanief Sallie, with a sensational score of forty five stableford points. Hanief had an unbelievable round of golf topping the leaderboard at the end of the days play with a blistering forty five points. Haniefs round included four birdies and just two dropped shot for a very impressive gross score of two under par. Division A winner on the day with a brilliant score of thirty nine points was Stuart Cassidy and runner up on thirty eight points was low handicapper Ramli Sulaiman. Tanja Bohler claimed the prize on offer for topping division B with a great score of forty points. Naresh Khurana was runner up in Division B on another excellent score of thirty nine points. Sami Butt took home the final prize on offer for best gross with a gross stableford total of thirty-four points.

3nd Visions International Cup supported by BMW grand final will take place on Sunday 26th of February. Both teams will be extremely strong and we cannot wait to see who will be crowned champions.