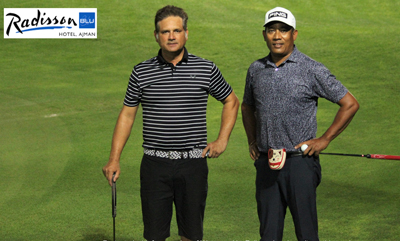 As always a full field of golfers descended on Sharjah Golf and Shooting Club for the ever popular Radisson Blu Hotel Ajman which took place on Wednesday the 29th of September. With some great prizes up for grabs players competed in a two man team split division Texas Scramble from the white and yellow tees.
Competitors were split into two divisions those in division A had a combined handicap of twenty five and under and division B was for the combined handicaps of over twenty five. Claiming top spot in Division A it was the duo of Purna Sharma and Shoab Khan who posted a blistering eleven under par sixty one. The pairs round included seven birdies and two net eagles in what was an excellent round. The extremely unlucky runners up were SGSC Vice Captain Ravi AE and Paul Nancarrow who agonizingly lost out on countback as they also posted a sixty one. The pairing of Andre Fugle and Faye Muhammed gelled perfectly on the night as they claimed top spot in division B posting an impressive eight under par sixty four. The pairs round included no dropped shots and eight birdies both contributing equally to the score. Another duo unlucky to lose out on countback was division Bs runners up Shajeer Parambath and Muhammed Shameer. Shajeer and Muhammed produced some brilliant golf on the night as they too posted an eight under sixty four. All winners on the night were delighted to take home the prizes generously donated by Radisson Blu Ajman.