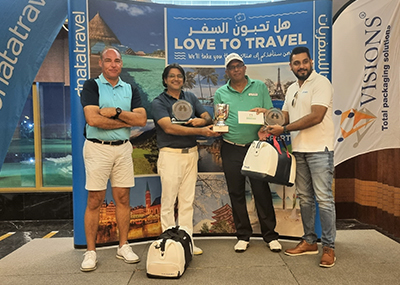 Sharjah, UAE, 28th November 2022: Sharjah Golf and Shooting Club (SGSC) held one of its most popular events on Sunday 27th November 2022, the 13th edition of its ‘Ultimate Pairs’ tournament. This year, the Club was delighted to welcome dnata Travel on board alongside Visions to support the event.

A strong field of twenty pairs descended on SGSC to battle thirty-six holes facing four different formats, all eager to get their hands on the fantastic prizes on offer from the event sponsors.

After an impressive day of golf, it was Humayun Kaleem and Maruf Khan who reigned supreme and were crowned the ‘Ultimate Pair’ for 2022.

Sam McLaren, Director of Golf at SGSC, commented: “The annual Ultimate Pairs event, which covers thirty-six holes and combines four different formats, offers a challenge for any partnership. Humayun and Maruf took this on with ease. The duo topped the leader board by the narrowest of margins; just a single shot, and took home an impressive prize haul on a score of three under par, a total of one hundred and forty one.”

Kaleem and Khan overcame all formats including the challenging foursomes on what was for both a very impressive thirty-six holes. The pair were delighted to go home with the win and were both full of praise for the event, the condition of the course, and its sponsors.

Second place went to Joe Bautista and Amiya Ranjan, the pair were unlucky on the day as they finished on a total score of two under par that was agonizingly just one shot too many. Low handicappers Ramli Sulaiman and Adhip Shankar took home the spoils for best gross on a total of one hundred and forty nine.

Other prize winners on the day included Sergio and Sidney D’Souza who took home best Texas Scramble score with an excellent result of four under par. Best Greensome prize was collected by Andrew Thom and Chris Andrews, posting a brilliant score of thirty three. Josh Kelly and James Allan took home the Betterball prize on a score of four under par. The final prize up for grabs was for the tricky Foursomes format where Loknath Tiwarie and Girendra Ghimire gelled perfectly to post an impressive thirty-six and claim the spoils.

A great day was had by all in this ever-popular event, and the inclusion of dnata Travel, the UAE’s longest serving travel provider, made it one of the best Ultimate Pairs yet, while the challenge of the four different formats added some extra spice to the day.